BY MAURA KINSELLA of Happiness Watts

In September, Michelle caught up with Maura Kinsella while she was in town for the Gateway Cup and just prior to her heading to the Team Time Trial World Championships in Richmond, VA. She taught us of her lifestyle company – Happiness Watts – which is dedicated to finding the fun in competitive sports.

Watts are the unit of energy cyclists use to measure how much power they’re generating. Competitive riders can hyper focus on watts. Some spend more time staring at their onboard computers than appreciating the scenery. Maura found that adding in some small tokens of life outside the races, helps to round out the intense needs of a competitive athlete.

Maura has left the racing circuit for the time being, and is focusing more on yoga, and especially restorative yoga now. She knows the importance of balance in life and finds it these days on her cruiser bike and yoga mat. If you find yourself faced with a life-altering injury try to accept where you are and unroll your mat every day as a commitment to the devotional path of yoga. You will learn new techniques that keep your mind and body healthy. While Maura’s racing career has been sidelined due to some injuries suffered during race crashes, she is finding healing through yoga and her #HappinessWatts company is still very much alive and well. Follow Happiness Watts on Twitter, Facebook, and Instagram, and hashtag your happiness watts photos #happinesswatts to be featured. 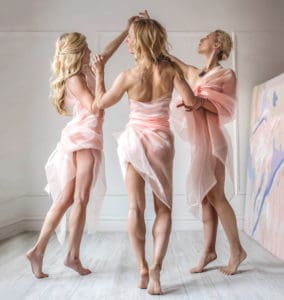